Bitcoin’s adoption cycles have been fascinating to watch over the years.

Every time there’s a sustained rise in price, more people jump on board.

Some of these new buyers drop out after the first correction, or take a small profit and don’t come back.

But some grow to appreciate the deeper side of crypto – the monetary revolution aspect. This is the “hodl” (hold) crowd.

With each adoption cycle, the base of holders increases (after they’ve survived a few major corrections, the volatility gets easier to handle).

So… what are the holders waiting for?

Those of us in it for the long haul are making a long-term bet on mainstream adoption. We envision a future where the majority of people store a chunk of their savings in various cryptocurrencies.

Here’s a classic bitcoin meme that explains the thinking. 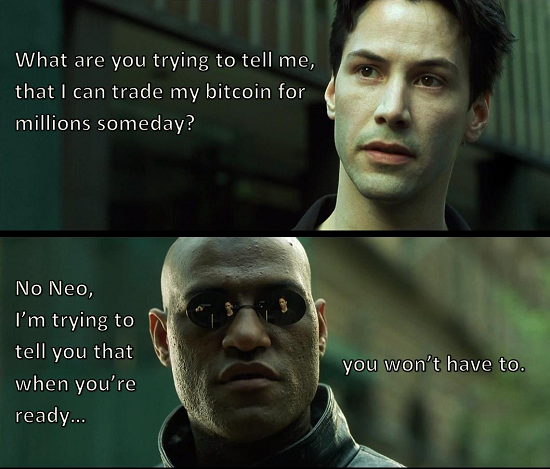 Why do we think that this is likely to happen?

The primary reason is that many of us have lost faith in the current financial system. We view it as unsustainable and increasingly fragile.

Here’s a cynical (and somewhat oversimplified) view of the current system.

We trust banks with our money. They gamble with it. Their gambling blows up in their faces. We bail them out (or the Federal Reserve does). And then the cycle repeats.

The more bailouts – and associated monetary tinkering – that go on, the more that currency tends to lose value (purchasing power).

Our economy starts to become dependent on artificially low interest rates, and we have to push them down lower, for a longer time, to get the same result. Savers are punished and (some) speculators with access to capital are rewarded.

The root of all these problems is that there is no real limit on the creation of additional fiat money. It’s far easier to run large deficits – and borrow – when money can be conjured out of thin air. The temptation to print, borrow and bail out creates a vicious cycle.

The whole system is built on top of a bad foundation. For all those reasons, it seems inevitable that it won’t last forever.

But with bitcoin, we don’t have to store our money this way anymore. Bitcoin created a new framework for digital money that cannot be counterfeited. It’s a breakthrough technology, and it’s “open source” (free to copy and use elsewhere). Now there are thousands of cryptocurrencies all competing for market share.

What about yield? Banks don’t pay much interest these days, but at least it’s something. How will crypto compete?

You can already lend speculators your cryptocurrency in exchange for a guaranteed return. (They get the monetary upside, you get a guaranteed rate.)

Today you can collect around 4% per year for loaning your bitcoin on Poloniex. That’s a yield similar to what a “normal” savings rate used to be.

Ethereum fetches a higher premium, at more than 13%.

It’s the start of an alternative financial system. And the systems are getting better, easier and more secure each day.

And get this: There are already companies that offer their employees a choice to get paid a portion of their salaries in bitcoin. One of them is Japanese tech company GMO Internet Group, which has more than 4,000 employees.

There are two primary theories about how mainstream adoption will play out. The first is that a single dominant cryptocurrency will emerge. This view tends to be held by the bitcoin “maximalists” and other coins’ equivalents. The argument goes something like this: Bitcoin is the oldest, largest and most secure network, which makes it likely to emerge as the sole winner.

I fall into a different camp. I believe we will use “baskets” of cryptocurrencies in the future.

Wouldn’t it be better to store your savings in a basket of private, independent forms of money? If our goal is to get away from a single point of failure (local fiat money), why wouldn’t we spread out our risk across dozens or hundreds of cryptos (once the market is more mature and stable)?

I foresee at least a dozen large cryptocurrencies and tokens. Competition is great for this market, and it would be a shame to see a single dominant player.

Today, cryptocurrencies are notoriously volatile. This will change as the market matures and the majority of investors, savers and even corporations adopt them.

Stability will come in time, but don’t expect it soon. As long as there’s more new (net) long holders coming in over the long run, the (overall) positive price growth can continue for decades. Of course, it will be bumpy until stability settles in and crypto becomes true everyday currency.

There is another advantage to the “baskets of crypto” theory. If we hold a diverse group of coins, our risks are substantially reduced. If any one coin loses a significant amount of its value, it won’t hurt much and should largely be offset by gains in other coins.

So that’s why many of us continue to hold on to those cryptocurrencies we think can last, despite the occasionally nauseating ups and downs. And it’s why we’re constantly looking for the next big opportunities.

Today we’re in the largely speculative phase. It’s early, and the infrastructure is being built as we go. We don’t know for sure that crypto will succeed.

Then again, by the time we do know whether this experiment will succeed or not, prices will either be much lower than today or hundreds/thousands of times higher.

Crypto remains one of those rare, calculated risks with extreme upside and limited downside. I say “limited” because it’s limited to the size of your investment.

Act accordingly, and don’t bet money you can’t afford to lose. If you look at crypto this way, you’re less likely to get hurt and more likely to make money by adopting the long-term perspective. A former financial advisor, he also has extensive experience with Internet marketing and financial writing. Adam has worked as a marketing consultant for sites including chess.com and catalogs.com. He has built three profitable web businesses.
Share this post / page here: